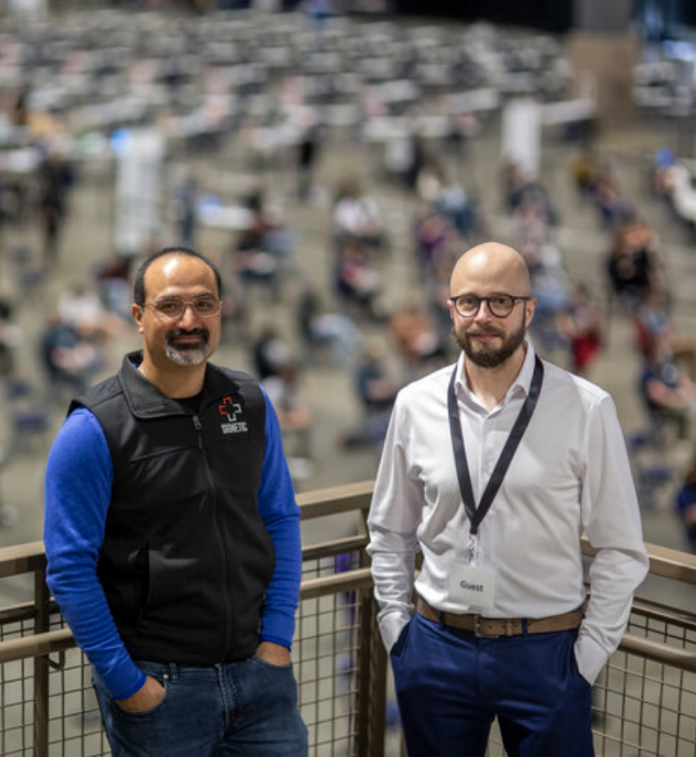 It’s late December, 2020, and Leah Tivoli is assessing options for the City of Seattle’s registration and scheduling software for an unknown number of vaccines, which will arrive on an unknown date. That shipment of vaccines will be followed by more shipments, the quantities and arrival dates of which are also unknown.

As Manager of Innovation & Performance at the City Budget Office, Tivoli has seen demos and pitches from a raft of vaccination management software vendors. Microsoft is in the mix. Salesforce has adapted an offering. The Washington state Department of Health is pushing Prepmod, which the City could use for free.

But Tivoli and the City had some criteria.

“I just wanted something that was really, really clean and simple, and meant for vaccinations,” she says. “When you're dealing with lots of volunteers, and temporary staff, you want your technology to be as simple and as intuitive as possible. We wanted something where there wasn't way more fields than what we needed to collect. MVS had it. I thought, ‘Oh, this is very nice; it's just very clear on the patient side and—we later learned—on the administrative side as well. So I became very interested in MVS very quickly.”

Equitable distribution was also a goal, says Tivoli. “Lukas [Svec, Signetic chief product officer] had made mention of equity several times on our first phone call. That dedication to the idea just wasn’t something we’d heard yet.”

The City was already working on its Equitable Vaccination Plan with a number of stakeholders—including Public Health - Seattle & King County, the Seattle Fire Department, the state Department of Health, Health and Human Services, and the White House—to provide more resources for its community health centers, mobile teams, the in-construction clinic at the Lumen Field Event Center, and other community based organizations. So the commitment to equity was another draw for Tivoli. In those early stages, she says “equitable distribution was one of our very top concerns.”

Tivoli and her team liked the product too.

“The straightforward user experience and commitment to vaccination equity were major factors,” says Tivoli. “It was a very requirements-driven choice. And ultimately MVS could do email and text confirmations; I learned the power of text messaging through setting up the Covid testing programs, and I just couldn't live without it. It’s so effective.”

Lumen took massive effort to organize and launch, so Signetic concurrently coordinated with fire departments to reach overlooked and neglected communities. At the same time, smaller sites—with the capacity for 1,000 vaccinations per day—got running in the Rainier Beach and West Seattle neighborhoods.

The City also used its first allotments of vaccine to vaccinate residents of adult family homes. It then expanded to reach seniors in Seattle public housing and to offer pop-up clinics in partnership with community groups, unions and other organizations.

Because MVS was originally conceived as a flu vaccination solution for a traveling nurse association, Signetic had to make adaptations so the product could also handle mass vaccination sites like Lumen. This meant load testing and other features were required. Signetic worked with Microsoft to address scaling capacity. Then they accelerated the development process, fitting an estimated eight months of development work into two months. CEO Chandika Bhandari credits the speed to two main factors:

“Since we’re global—with teams in Seattle, Boston, and Kathmandu, we were able to establish a 24-hour development cycle,” he says. “Plus since we started with the foundation of Power Apps, we could move a lot faster. There were a lot of late nights and early mornings, but the mission couldn’t have been more crucial.”

The agility allowed Signetic to quickly add features like private registration links, one-time registration codes, and mobile site customizations, which in turn allowed the City and its partners to target specific communities and historically underserved demographics.

By March 6, Lumen Field opened and began processing thousands of vaccinations per day. By mid-May, MVS was at times processing more than 10,000 vaccinations a day. Throughout the engagement, Tivoli and her team worked closely with Signetic to handle hurdles and eventualities.

“I felt extremely supported by them throughout the project,” Tivoli says of Signetic. “This is a stressful thing, because you're dealing with people's healthcare. And just being able to have someone that you can call who's going to empathize and help you out and quickly work out a solution. I mean, that's invaluable.”

City organizers continued to target the 65-and-older recipients. Seattle Fire Department mobile teams administered vaccinations at 88 adult family homes and 90 housing buildings for seniors and people with disabilities. By late May, an estimated 91 percent of residents in that group had initiated the vaccination process.

By late July, 82 percent of all eligible City residents had initiated the vaccination process, and the City began transferring testing and vaccination programs to partners. To date, MVS has supported 395 different vaccination sites for the City of Seattle.