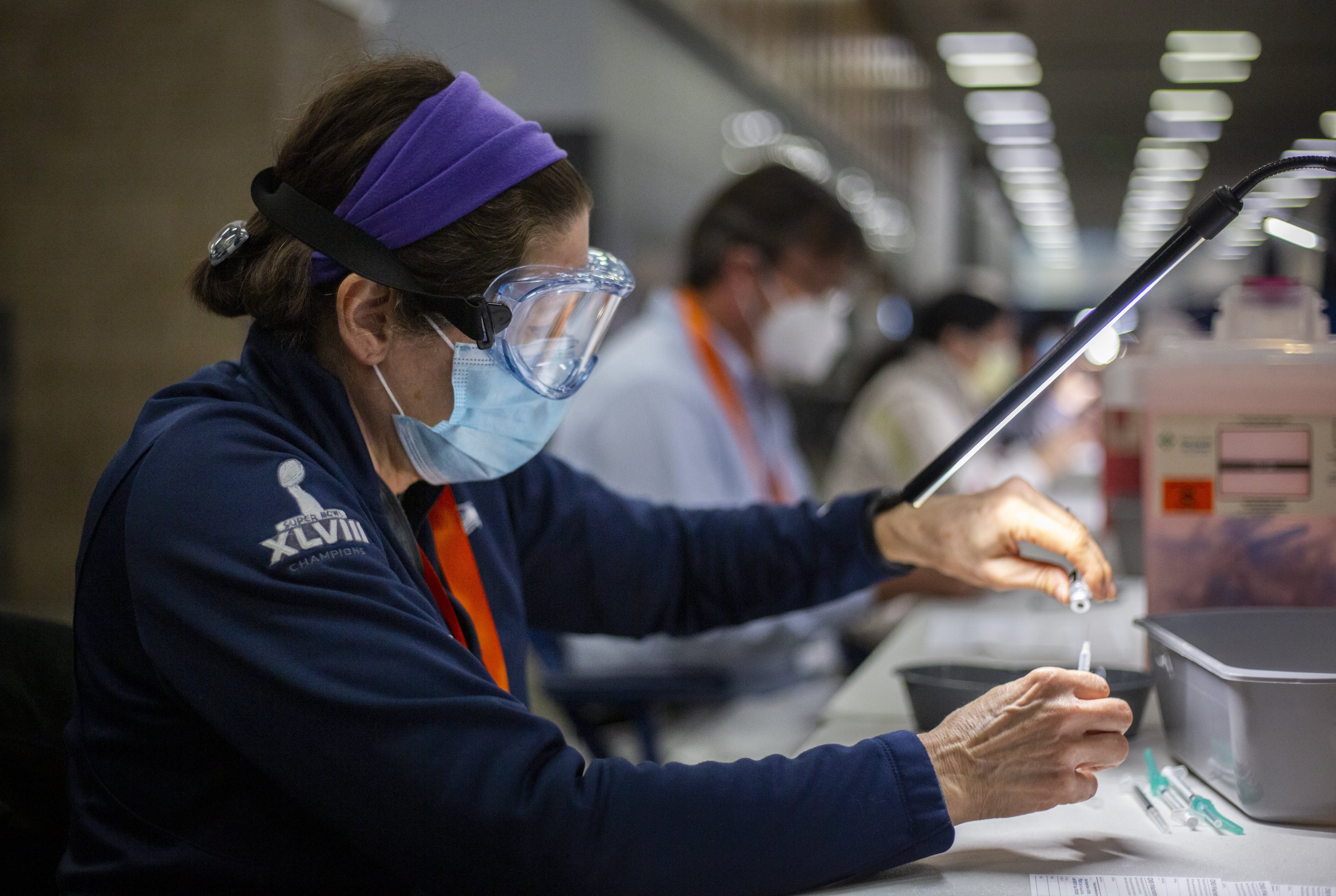 A volunteer for the City of Seattle prepares a vaccine.

• The following interview has been edited for length and clarity. •

The City has largely wrapped up its initial vaccination efforts, and you finally got to take some time off. Did you do anything fun?

I turned off my phone. And it was the most amazing feeling. It had been 16 months since I last turned off my phone, since COVID had started. It was amazing. So I didn't do anything but stay away from work. And now my phone's back on and not going crazy.


It's a really good feeling to be where we're at. And hopefully we can stay on it and keep progressing.

That is the hope. And even if some of the news right now is not the most positive, what’s exciting is that even though we're seeing our positivity rates go up, hospitalizations are not going up in the same trend. So that is a huge kudos. While it's not 100 percent—people are still getting sick—we have done the work to slow deaths. We did something that’s lifesaving, which is amazing.


Let’s step back to the beginning. How did you first hear about or find Signetic MVS?

So I knew that [the City] was moving into vaccinations. And so I went to a [Seattle Visiting Nurse Association] flu shot clinic. My prior role, before vaccinations, was the Covid Testing Coordinator. So Brian Wallace [Acting Captain and COVID-19 Testing and Vaccination Coordinator with the Seattle Fire Department] and myself helped set up all the City’s testing for sites.

And we knew that vaccinations would be next. And so I went and tried out one of the drive-throughs. I tried the MVS registration software, and I loved it. And so then I flagged it for Leah [Tivoli, Manager of Innovation & Performance at the City of Seattle Budget Office] and the Mayor's Office as something we would want to check out.


What were you initially drawn to?

So there are several things that I like. First off, it was super user-friendly. I knew exactly the right pathway to get through the process, and I could finish it very quickly. So I did it on my phone. It only asked for the actual information it needed, and didn't ask for anything else. And then I got an email with all the information that I needed. And I liked the text reminders that were built into it—everything you needed to know for your appointment.


Can you walk us through what you were working on while the site at Lumen Field was being assembled and then operational?

Yes, I personally think that I was doing the most fun work; we were doing the mobile team, which was the most equity-focused effort the City could have been doing. So as we were continuing all the testing at our mass testing sites, we knew from the first eligibility criteria that adult family homes were key places to go.

So that's when we needed Signetic; it was a very rushed thing. We asked Signetic to basically build it as the app that we now have, where it's just a really quick one-sheet that we could do while we're at an adult family home, outside on a tablet. So we first started using Signetic for our mobile efforts.

I was helping schedule and coordinate the registration process for all the Seattle Fire teams to go out to these different adult family homes, and then do these pop-up clinics, and then eventually go to senior housing, affordable housing.

And then, you know, everywhere—even bars eventually. So it first started with mobile, and we were building out the registration platform for that. And then as that got kind of cleaned up, we started then moving into mass vaccinations.

And that’s when the West Seattle and Rainier Beach sites first launched. I was helping manage the registration operations there. We helped launch what the process of registration would look like. At that time, we were doing closed registration, so it wasn’t a public link that anyone got to. So I was in charge of testing that and making sure it ran smoothly, and then Lumen opened.


Equity was a major priority for the City of Seattle. Can you talk about that a little bit more?

So right from the very beginning, the City made the decision to make sure that we were focusing on our most vulnerable populations, folks that were most hard-hit by COVID-19, which means you're focusing on very specific ZIP codes which have high positivity rates.

And usually within those positivity rates for specific demographics. So we knew that we needed to get into those ZIP codes. So at the very beginning of our mobile efforts, we actually partnered with different local nonprofits and community-based organizations to provide pop-up vaccine clinics at their sites. So we focus specifically on ZIP codes where we were seeing low vaccine uptake or access and high deaths.

We brought the clinics there.

And then we partnered with trusted messengers in the community that could provide in-language forms guidance, medical advice workshops, and things like that, to really make it an effective event where we got a lot of folks vaccinated. First was the strategy to make sure that we were vaccinating those people who are at the highest risk.

That was when we were only able to do these very small little clinics, but as mass vaccinations started to become an option, and we saw eligibility opening up, we wanted to continue that work to make sure we were getting to those disadvantaged folks.

We continued our community-based organization partnerships, but now we gave them early access to our Rainier Beach site and our West Seattle site, to mass vaccination clinics. At first, we were only open to community-based referrals and those organizations that were sending people.

It wasn't open to the public, just specific groups that were eligible at the time and given what phase we were in—grocery workers, people over the age of 60, people from multi-generational households, etc. Community partners would help bring those eligible folks to our sites before it was open to the general public. Because we knew that we wanted to make sure those folks had access, and that they weren't left behind.

Another part is that we made sure that all the paperwork that we have created was in-language for folks, in multiple languages, so people were able to access it. And we did ethnic media campaigns to make sure that we were marketing out in languages that people could read.


How did you prioritize which languages to do first? I imagine Spanish is a big one.

So the city already has documented the eight languages that are most used within our area.

So when we submit anything to move forward, paperwork-wise, we actually get them all translated at the same time. Specifically, Latinx folks were the ones we were actually noticing had really low uptake for vaccination. Latinx men were way below percentage compared to other demographics, and so we really did want to focus on them. And so that's when we started working with Signetic, to be able to get Signetic MVS in-language, in Spanish first. But the other languages, we have data showing those top eight languages are the ones that we always will provide because they’re the most used in Seattle.


You mentioned working with trusted members of the community to help outreach efforts. Can you tell us a little bit about that?

So Idris Mosque is a well-known mosque that typically serves people who are Ethiopian. And so we partnered with them to do several big vaccine pop-ups. They’re a faith institution that is well-trusted in the community and has a really broad outreach. We also work with other community-serving groups that could help. Lake City Collective has a really broad reach to the senior and family population in the Lake City area and the north Seattle area. They were a phenomenal partner.

And NAACP was another partner that had a huge reach. We were specifically really trying to get the Central District, where, even now, if you look at public health data, you can see that we have very low vaccine uptick for black men. So really just working with partners to try to get these disparities and these gaps shortened, to get more people vaccinated.


Did you find any outreach methods that were particularly effective?

We received a grant where we were able to put some dollars into this. So we had a little bit more funding to help, but we actually were able to pay our community-based organizations to do the work. But a lot of these folks are working completely free otherwise, and for them to literally call all their community members to get vaccinated is a hard ask and very hard for people to do. And so, being able to add some financial assistance to that actually made a huge difference. And again, if it were the City calling these community members or having a very awkward cold call, it just wouldn't go well. Just working with trusted messengers and helping them have resources to do the work, I really do think that made all the difference for us.


Did you take part in teaching clinicians and volunteers to use MVS?

My role for the vaccine sites was the registration and the app. So all of our EMTs and medical staff did not use our app, actually. So Brian Wallace, Captain Brian Wallace from the fire department, he trained the fire employees, medical staff on their process, and then I trained everyone in the app itself.


How did that go? Did people pick up on how to use the app pretty quickly?

Yeah, and that's what was really great and really the takeaway from Signetic is that it's been this team and this system that’s been so flexible, that we were able to make the app what we needed it to be. So it was super easy. We were able to take parts away that didn't make sense or people would get stuck on, and really just simplify the work and add validation to it so we had less mistakes. So just the fact that this team was able to adapt and change with us so quickly, it made all the difference. And then having a system that was so adaptive, we were then able to easily train our staff. The training for Signetic took maybe 45 minutes, and that was with testing people as well. Really the training part alone would take 20 minutes at most. 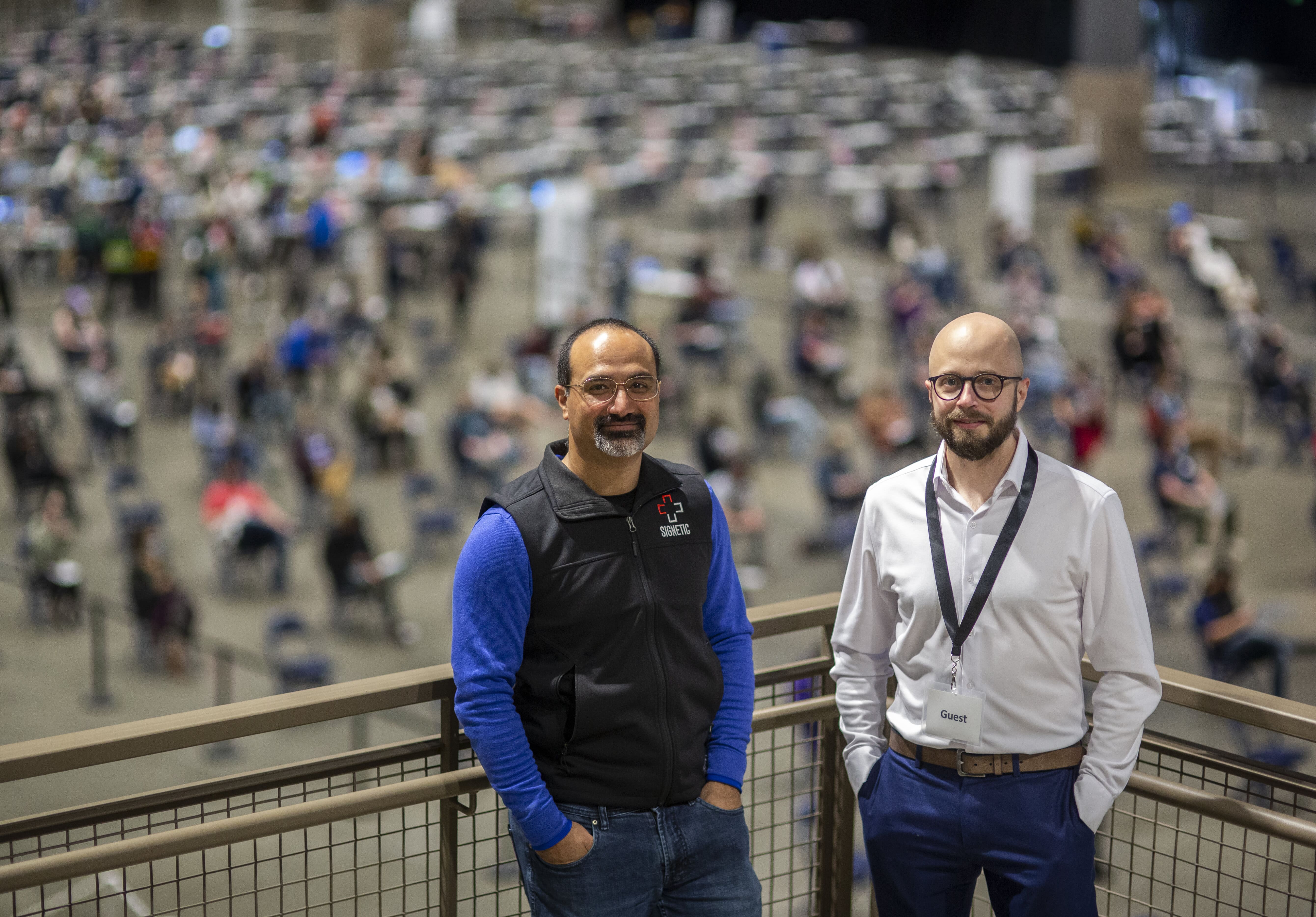 How do you work toward vaccination equity when the normal forces of supply and demand are haywire? 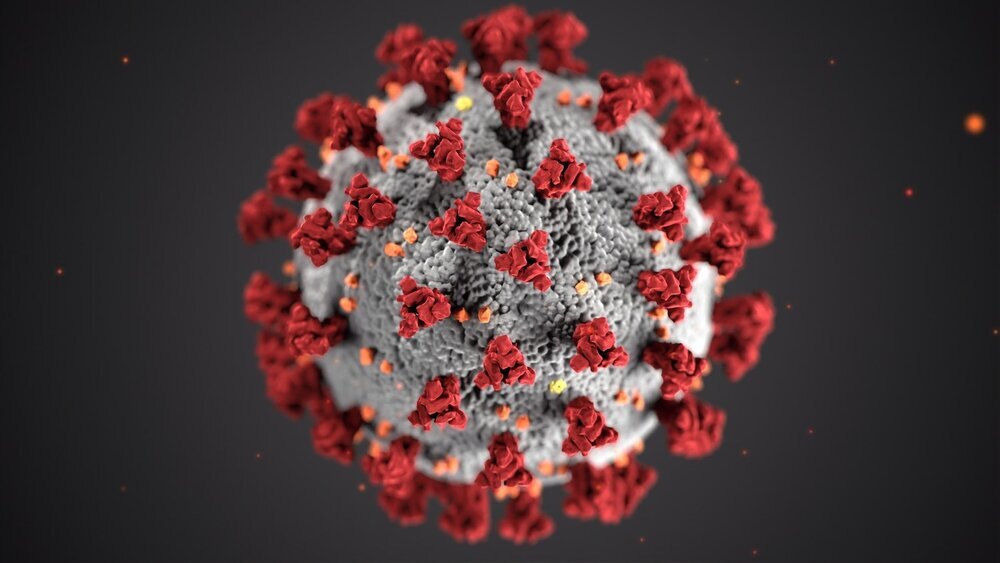 City of Seattle Partners With Signetic

“We think we can do up to 20,000 [vaccinations at Lumen Field] a day,” said Seattle mayor Jenny Durkan at an outdoor Mar. 1 press conference. “But that will take us scaling up both personnel and vaccines.”